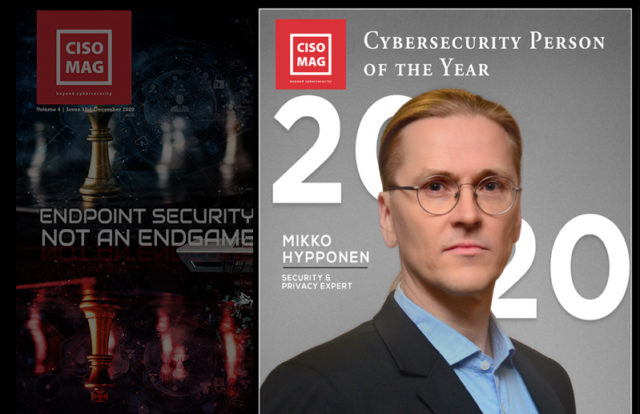 CISO MAG Cybersecurity Person of the Year recognition honors some of the biggest cybersecurity personalities. These are individuals who have, over the years, been committed to bringing awareness into the realm of cybersecurity – to whom the information security industry is profoundly indebted. The parameters of selection include experience, contribution to industry, spreading cybersecurity awareness, authorship, speaking roles, awards & recognitions, influencer status, and patents.

Mikko Hyppönen is the Chief Research Officer for F-Secure. He has worked with F-Secure in Finland since 1991. He is known for the Hyppönen Law about IoT security, which states that whenever an appliance is described as “smart,” it is vulnerable.

Cybersecurity Person Of The Year.
Thank You CISO Mag. pic.twitter.com/Lopw2yphNP

Hyppönen has led his team through the largest outbreaks in history. His team took down the world-wide network used by the Sobig.F worm. He was the first to warn the world about the Sasser outbreak. He named the infamous Storm Worm and has done classified briefings on the operation of the Stuxnet worm.

Hyppönen has assisted law enforcement in the U.S., Europe, and Asia on cybercrime cases. He has written for magazines such as Scientific American and Foreign Policy, and for newspapers like The New York Times. Hyppönen has addressed the most renowned security-related conferences worldwide. He is also an inventor and holds several patents, including U.S. patent no. 6,577,920 “Computer virus screening.” He has been the subject of dozens of interviews in global TV and print media, including one in Vanity Fair.

So how could we forego an opportunity like this to grab an exclusive one-on-one with the man of the hour. View the video below to see what Hyppönen thinks of cybersecurity in the current digital age and his suggestions for the road ahead:

Born in 1969, Hyppönen was selected among the 50 most important people on the web by the PC World magazine. He also received the Virus Bulletin Award, awarded every ten years, as “Best in industry.”

He has delivered hundreds of talks in over 40 countries over the last 20 years, including keynotes in the most important security conferences. In 2010, he was awarded the Virus Bulletin Award as the best educator in the industry.

Hyppönen has also been credited by Twitter to help improve Twitter’s security.