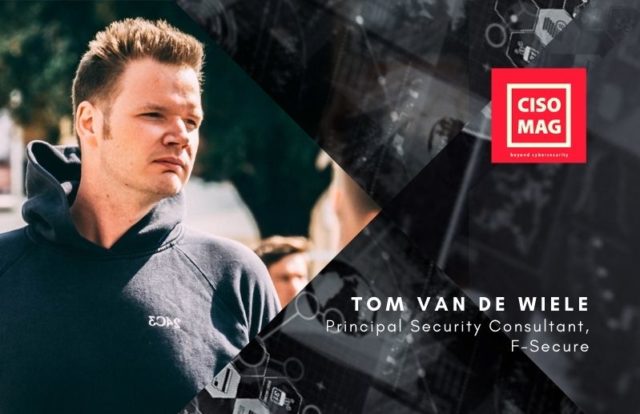 On the surface, a Red Team exercise appears like a scene straight out of a Hollywood movie. Spies masquerading as employees walking straight into the office so instinctively that no one bats an eye. Plugging things into your devices that are not supposed to be there. Tapping cameras, telephones, microphones, rolling out emails, or even walking around with a banana so you may assume the new guy/girl didn’t have time to grab a proper lunch. By the time you figure out they weren’t supposed to be where they were, it’s already too late. And the only sigh of relief is the fact that they were on your side — and they were working for you.

So, before your company humors itself with a Red Team assessment it might be of use that you talk to an expert about it. And for that, we have Tom Van de Wiele, Principal Security Consultant at F-Secure. With nearly 20 years of experience in information security, Tom specializes in red team operations and targeted penetration testing for the financial, gaming, and service industry. When not breaking into banks Tom acts as an adviser on topics such as critical infrastructure and IoT as well as incident response and cybercrime. With a team that has a 100% success rate in overcoming the combination of targeted organizations’ physical and cybersecurity defenses to end up in places they should never be, Tom is possibly one of the best red team experts in the world. In an exclusive interview with Augustin Kurian of CISO MAG, Tom discusses key questions a company should ask before it engages in a Red Team assessment.

It is often said that Red Teaming is much better than regular penetration testing? What are your thoughts about it?

Red teaming, penetration testing, source code review, vulnerability scanning, and other facets of testing play a key part in trying to establish the level of control and maturity of an organization. They all have different purposes, strengths, and limitations. A penetration test is usually limited and only focused on a certain aspect of the business e.g. a certain network, application, building, or IT asset; a red team test is based on the attacker’s choice and discretion on what to target and when. Keeping in mind the actual objectives and goals of what the client wants to have simulated that is relevant to them. That means anything with the company logo on it could be in scope for the test — keeping in mind ethics, local and international laws, and good taste.

In general, Red Team Testing is only for organizations that have already established a certain maturity and resilience when it comes to opportunistic and targeted attacks. This resilience can be expressed in many ways, hence we want to make sure that we are performing it at the right time and place for our clients, to ensure they get value out of it. The goals are three-fold: to increase the detection capabilities of the organization tailored towards relevant attack scenarios, to ensure that certain attack scenarios become impossible, and increase the response and containment time to make sure that a future attack can be dealt with swiftly and with limited impact. Ultimately, all efforts should be focused on an “assume breach” mentality while increasing the cost of attack for a would-be attacker.

Knowing that red teaming and target-based attack simulations are at the proverbial finish line for an organization, it is still beneficial to have a red team as an end-goal as part of a real simulation. It forces organizations to look at their own security from a threat-based approach, rather than a risk-based approach, where the past defines the future for the most part. For instance, just because you haven’t been hit by ransomware in the past, doesn’t mean you won’t get impacted by one in the future. “Forcing” organizations to look at their own structure and how they handle their daily operations and business continuity as part of threat modeling, sometimes brings surprising results in positive or negative form. But at the end of the day, everyone is better off knowing what the risks might be of certain aspects of the business, so that an organization can take better business decisions, for better or for worse, while they structure a plan on how to handle whatever it is that is causing concern to stakeholders.

When should a company realize that it is an apt time to hold a Red Team assessment? What kinds of industries should invest in Red Teaming? If so, how frequent should the Red Teaming assessment be? Should it be a yearly process, half-yearly, quarterly, or a continuous one? How often do you do one for your clients?

All sectors can benefit from a simulated targeted attack to test the sum of their security controls, as all business sectors have something to protect or care about, be it customer data, credibility, funds, intellectual property, disruption scenarios, industrial espionage, etc. What kind of testing and how frequently depends on the maturity of the organization, its size, and how much they regard information security as a key part of their organization, rather than a costly afterthought, which unfortunately is still the case for a lot of organizations.

Major financial institutions will usually schedule a red team engagement every 1 – 1.5 years or so.

In between those, a number of other initiatives are held on a periodical basis in order to keep track of the current attack surface, the current threat landscape as well as trying to understand where the business is going versus what technology, processes, and training are required to ensure risk can be kept at an acceptable level. As part of an organization’s own due diligence, it needs to ensure that networks and application receive different levels of scrutiny using a combination of preventive and reactive efforts e.g architecture reviews, threat modeling, vulnerability scanning, source code review, and attack path mapping, just to name a few.

Is it only the big corporate companies or companies of all sizes that should engage a Red Team assessment?

Smaller or mid-sized companies might not be able to budget elaborate red teaming exercises nor should they, as long as they know what to protect — and schedule scanning and penetration testing exercises as part of a formal vulnerability management process, which should be mandated by someone or a department specifically responsible for cybersecurity. This should be combined with a number of business impact and crisis management exercises to try and prevent as many of the relevant attack scenarios as possible while trying to detect and respond to the ones that are too expensive to mitigate or where the mitigation does not scale well. Once those things are under control and a certain maturity is established, then mid-sized and smaller companies can start thinking about protecting themselves against a coordinated targeted attack.

This interview first appeared in the March issue of CISO MAG. Get your preview here.