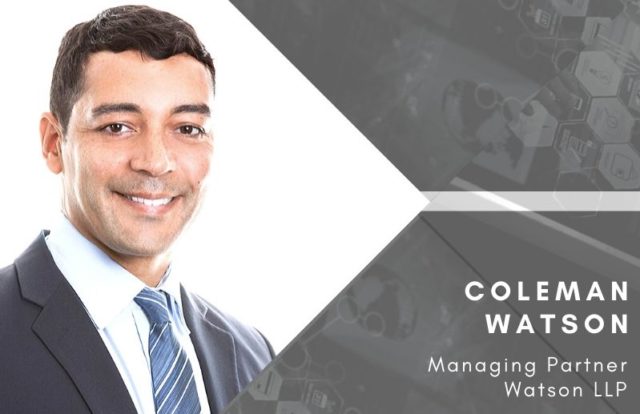 Coleman Watson is the Managing Partner of Watson LLP, and his background has a unique blend of engineering, business, and finance interposed with the practice of law. He is a registered patent attorney with the United States Patent & Trademark Office, and he counsels and advises clients on intellectual property and technology issues. Coleman also has broad experience in patent litigation, trademark litigation, videogame law, blockchain and cryptocurrencies, government investigations, qui tam claims, and “bet the company” litigation.

Where do you see the cryptocurrency industry in the next five years?

Cryptocurrency will start to become more disruptive to the global financial system, much like decades of credit card use after they were first injected into the financial system back in the 1950s. Cryptocurrency represents the perfect storm for today’s consumer who generally wants more autonomy with sending, receiving and using their own money with a moment’s notice and for little to no fees. Unfortunately, close to the outset, cryptocurrency (specifically Bitcoin) was cast in a negative light from infamy such as Silk Road. So that was a setback to the consumer perception of its value.

Even today, it is not uncommon for the average consumer to make some tall claim like “Bitcoin is only used for the dark Internet.” But equating cryptocurrency to per se illegal conduct is a lack of understanding: to say that is really no different than saying “all cars are bad because drug dealers drive them.” A positive public perception of cryptocurrency will be the tipping point and that will happen when a trusted major public platform (e.g., Amazon, eBay, etc.) begins to accept cryptocurrency as a form of payment.

In the United States, there is no consistent legal approach to cryptocurrencies. Bitcoin is classified as a commodity by CFTC, while the IRS treats it as property. What can be done to overcome this problem?

The problem is that there is no federal legislation on cryptocurrencies. This is unsurprising in light of the recent congressional hearings where sitting members of Congress had difficultly grasping issues as simple as how Facebook makes money or whether Facebook is on the Internet. That leaves us with legislators who are uneducated and unprepared to deal with an important incremental change in the financial services industry. But people need clarity.

The system we have now where various states classify cryptocurrencies as different types of instruments, juxtaposed against the Securities and Exchange Commission, Commodity Futures Trading Commission, Financial Crimes Enforcement Network and Internal Revenue Service’s classifications (which all differ) is not a sustainable system. To be effective, the law must be clear. However, it is promising that Congress seems to be finally close to weighing in on the issue, as U.S. Reps. Warren Davidson and Darren Soto recently introduced the Token Taxonomy Act to provide some clarity to cryptocurrency classifications.

A lot of tokens traded on exchanges have circumvented SEC regulations by declaring themselves utility tokens. How can this problem be solved?

First off, the SEC determines what is and what is not a “security” by reference to a court case from 1946 (SEC v WJ Howey Co.). At issue in that case was whether contracts directed to orange groves were securities. Put simply, Howey finds a security if a person invests money in a common enterprise and is led to expect profits solely from the efforts of a third party. Cryptocurrency launched about 60 years after Howey, so we are living in a system where the SEC is applying a broad definition to technology that was not contemplated at the time the Supreme Court handed down the decision.

The problem must be solved with legislation that addresses the world we live in today, not the world of yesterday. The Token Taxonomy Act is a great start because it would amend the Securities Act of 1933 and the Exchange Act of 1934 by adding a definition for “digital tokens.” Under certain scenarios they would be exempt from the securities laws.